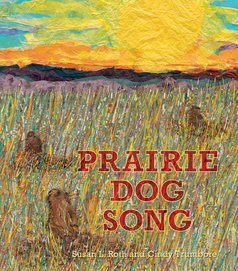 For thousands of years, green and gold grasses covered North America from Canada to Mexico. The prairie and desert grasslands were home to a variety of animals, from small prairie dogs to huge bison. But in the nineteenth century, ranching and farming took hold in the grasslands, and over time many of the animals and plants vanished.

Then, in the late 1980s, scientists discovered a region in Mexico where green and gold grasses still waved and prairie dogs still barked. The scientists understood the importance of this grassland ecosystem and the prairie dogs’ key role in it. Could they now preserve the area and bring back its lost animals and plants?

CINDY TRUMBORE has been involved with young people's literature for most of her career. A former editor in children's book publishing, she now writes children's books, edits books for classrooms, and teaches writing. She has collaborated with her friend Susan L. Roth on several award-winning titles, including Parrots Over Puerto Rico, which won the Robert F. Sibert Medal for Nonfiction; The Mangrove Tree; and most recently Prairie Dog Song. She lives with her husband in Delaware. You can visit her online at cindykane.net.