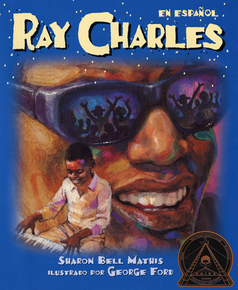 As a young boy he fell in love with music, and as a man, the world fell in love with his music. Ray Charles and his soulful, passionate rhythm and melodies have been embraced around the globe for decades. Now, in this beautiful Spanish edition of the award-winning biography, readers can follow Charles from his boyhood, when he lost his sight completely and learned to read and write music in Braille, until the age of 40, when he had become a world-renowned jazz and blues musician. In a new introduction, the author updates Charles' life to the present day.

For additional connections and exploration of themes, pair these field trip and activity ideas with Ray Charles.

Check out the classroom-tested, standards-aligned lesson plan Jazz Up Writing Workshop: Writing Biographies of African American Jazz Musicians by Lily Jones with Ray Charles, provided by ReadWriteThink.org, a website developed by the International Reading Association and the National Council of Teachers of English.

has won numerous awards for her many children's books, including the 1974 Coretta Scott King Author Award for RAY CHARLES. Some of her most enduring books include The Hundred-Penny Box, a Newbery Honor Book, and Teacup Full of Roses, an ALA Notable Book. A full-time writer, Mathis lives in Ft. Washington, Maryland.

is an award-winning artist who has illustrated dozens of children's books, including several by noted authors such as Nikki Grimes, Eloise Greenfield, Nikki Giovanni, and Robert Coles. In 1974, he was the recipient of the first Coretta Scott King Illustrator Award for Ray Charles. A lifelong jazz enthusiast, Ford lives in Brooklyn, New York, with his wife.