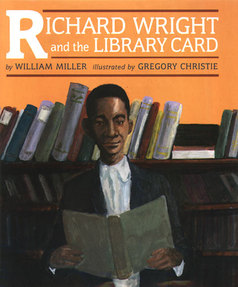 Richard Wright and the Library Card

As a young black man in the segregated South of the 1920s, Wright was hungry to explore new worlds through books, but was forbidden from borrowing them from the library. This touching account tells of his love of reading, and how his unwavering perseverance, along with the help of a co-worker, came together to make Richard's dream a reality.

An inspirational story for children of all backgrounds, Richard Wright and the Library Card shares a poignant turning point in the life of a young man who became one of this country's most brilliant writers, the author of Native Son and Black Boy.

This book is the third in a series of biographies by William Miller, including Zora Hurston and the Chinaberry Tree and Frederick Douglass: The Last Day of Slavery. All focus on important moments in the lives of these prominent African Americans.