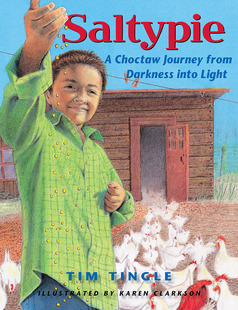 Bee stings on the backside! That was just the beginning. Tim was about to enter a world of the past, with bullying boys, stones and Indian spirits of long ago. But they were real spirits, real stones, very real memories. . . .

In this powerful family saga, author Tim Tingle tells the story of his family's move from Oklahoma Choctaw country to Pasadena, TX. Spanning 50 years, Saltypie describes the problems encountered by his Choctaw grandmother--from her orphan days at an Indian boarding school to hardships encountered in her new home on the Gulf Coast.

Tingle says, "Stories of modern Indian families rarely grace the printed page. Long before I began writing, I knew this story must be told." Seen through the innocent eyes of a young boy, Saltypie is the story of one family's efforts to honor the past while struggling to gain a foothold in modern America.

Karen Clarkson, Choctaw artist and tribal member, lives in San Leandro, California with her husband Bill and their two dogs. A trip to Paris when she was ten inspired her to study the old masters but she feels she came into her own as an artist when she started creating portraits of Native Americans. She first started learning about art by drawing pictures of all her relatives. In this way she felt as if she knew many of her ancestors even though she had never met them. Saltypie is her first book.