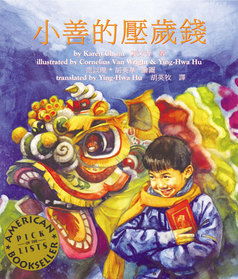 Sam and the Lucky Money (Chinese)

Sam can hardly wait to go shopping with his mom. It's Chinese New Year's day and his grandparents have given him the traditional gift of lucky money–red envelopes called leisees (lay-sees). This year Sam is finally old enough to spend it any way he chooses. Best of all, he gets to spend his lucky money in his favorite place — Chinatown!

But when Sam realizes that his grandparents' gift is not enough to get the things he wants, his excitement turns to disappointment. Even though his mother reminds him that he should appreciate the gift, Sam is not convinced — until a surprise encounter with a stranger.

Now in Chinese, Sam and the Lucky Money celebrates the sights and sounds of festive Chinatown streets. while telling the affecting story of a child who discovers that sometimes the best gifts come from the heart.

Check out the classroom-tested, standards-aligned lesson plan Promoting Diversity in the Classroom and School Library through Social Action by Michelle Ota with Sam and the Lucky Money, provided by ReadWriteThink.org, a website developed by the International Reading Association and the National Council of Teachers of English.

(1959-2003) was born in Seattle, Washington, and received a bachelor's degree in Communications from the University of Washington. She lived in Seattle, WA with her husband and daughter. Same and the Lucky Money was her first picture book.

and his wife Ying-Hwa Hu have illustrated dozens of award-winning books. Their illustrations have been praised by Kirkus Reviews as “bright, detailed and dynamic, vividly depicting . . . characters’ facial features and personalities.” Van Wright, a native New Yorker, lives in New York City.

and her husband Cornelius Van Wright have illustrated dozens of award-winning books. Their illustrations have been praised by Kirkus Reviews as “bright, detailed and dynamic, vividly depicting . . . characters’ facial features and personalities.” Hu, who was born in Taiwan, lives in New York City.