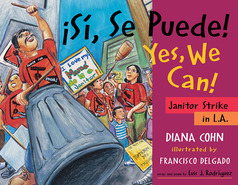 Carlitos' mother is a janitor. Every night, he sleeps while his mother cleans in one of the skyscrapers in downtown L.A. When she comes home, she waves Carlitos off to school before she goes to sleep. One night, his mamá explains that she can't make enough money to support him and his abuelita the way they need unless she makes more money as a janitor. She and the other janitors have decided to go on strike.

Will he support her and help her all he can? Of course, Carlitos wants to help but he cannot think of a way until his teacher, Miss Lopez, explains in class how her own grandfather had fought for better wages for farmworkers when he first came to the United States. Finally, Carlitos knows how he can show his mamá how proud he is of her. He and the other children in his class make posters and Carlitos joins the marchers with a very special sign for his mom!

Backmatter includes an interview by Luis J. Rodriguez (Always Running), discussing the real "Justice for Janitors" strike in 2000 with a union organizer who participated, as well as a poem inspired by it.

Diana Cohn has worked on environmental, economic, and global justice issues as a teacher, a media activist, and an advisor, program officer, and executive director in philanthropic institutions. She is the award-winning author of seven children's books, including ¡Si Se Puede! / Yes We Can! Janitor Strike in L.A., The Bee Tree, and Crane Boy, all published by Cinco Puntos Press/Lee & Low. She lives with her husband on a houseboat in northern California.

is the critically acclaimed author of Always Running: La Vida Loca, Gang Days in L.A., the inspiring story of how he found a way out of gang life in Los Angeles. Now a prominent poet, author, and educator, Rodríguez frequently travels throughout the country, educating the public about youth and violence, and counseling young people in gangs. He lives in Chicago with his wife, Trini Rodríguez, and their two young sons.

Francisco Delgado, a fronterizo artist, was born in Ciudad Juarez, Chihuahua in 1974. Through out his life he has resided in both twin cities of El Paso and Ciudad Juarez. Delgado's artworks reflect the United States and Mexican Border life and speak to the working class of the barrios. His visual language often uses iconic figures like El Chapulin Colorado, George W. Bush, Tin Tan, Lady Liberty, and Luchadores among many others to convey his political narrative. Even though his body of work is political and his message is direct it is delivered with the dark sarcasm and humor that is often found in Mexican, Chicano and Fronterizo Cultures. He attended the University of Texas at El Paso where he received several honorary awards and a BFA. He received his MFA from the Yale School of Art. His paintings have been on book covers, in national art exhibits, private collections and community institutions. Delgado's first picture book was Sí, Se Puede! / Yes, We Can! And his second book, Lover Boy is available now! Francisco and his wife Barbara have three children, Pedro, Xitlali and a Xochi.