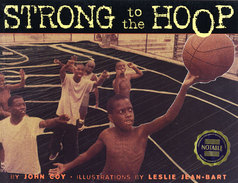 John Coy's energetic prose captures the intensity and emotion of the competition, while Leslie Jean-Bart's photo collages deliver the urban pace of the game.