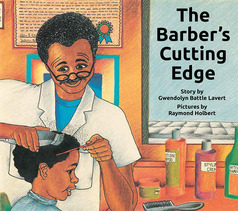 Rashaad gets his hair cut by the best barber in town. Mr. Bigalow is his name and words are his game--and that's what his cutting edge is all about! As Mr. Bigalow gives Rashaad a SPECIAL DELUXE haircut, Rashaad tries to stump him with words from his latest vocabulary list. But clever Mr. Bigalow always has the right answer. When Rashaad gets curious about Mr. Bigalow's methods, he discovers the secret to the barber's success.

Told with upbeat humor and delightful illustrations, The Barber's Cutting Edge shines a light on the meaningful interactions that take place in diverse communities every day and celebrates mentors of all cuts, fades, and shapes.

Dr. Gwendolyn Lavert is an educator and literacy consultant based in Bedford, Texas. She’s the author of more than twenty children’s books including Papa’s Mark, The Music in Derrick’s Heart, Off to School, and The Shaking Bag, which won a Parents’ Choice Award. Many of her notable titles celebrate African American culture and history. You can find her on Twitter at @gwen_lavert.

Raymond Holbert was born and raised in California, earned three art degrees from the University of California at Berkeley, and still lives in the Bay Area. He has illustrated books in a variety of disciplines and served as a faculty member in the art department at the City College of San Francisco for thirty-five years. He remains most active in the practice of photography—film, digital, and computer imaging—which allows him to blend photographic images with his original drawings. You can learn more on his website, memorybanque.com. Photo by Lewis Watts.