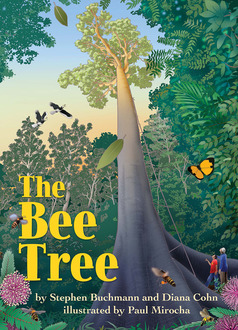 Nizam lives in a village in Peninsular Malaysia. His grandfather Pak Teh is the leader of the honey hunting clan. It is Pak Teh who has the high honor of climbing the tall Tualang tree deep in the rainforest. Lying on a branch more than a hundred feet in the air, he uses the clan's secret method to harvest the honey without being stung. But Pak Teh is getting older, and he is ready for someone to take his role. He believes that Nizam and his cousin Shukor should be the ones. Even though Nizam has climbed the mighty Tualang in the day-light, he has never done it at night. Will he be brave enough? Will the angry bees sting him? Or will he succeed and claim his place in the clan?

Stephen Buchmann is a pollination biologist, photographer, and adjunct professor of ecology and evolutionary biology at the University of Arizona in Tucson, where he studies buzz pollination and the microbiomes of bees. He is the author of eleven books, including The Forgotten Pollinators and The Reason for Flowers. A frequent guest on many public media programs, he lives in the Sonoran Desert of Arizona. Please visit his website at stephenbuchmann.com.

Diana Cohn has worked on environmental, economic, and global justice issues as a teacher, a media activist, and an advisor, program officer, and executive director in philanthropic institutions. She is the award-winning author of seven children's books, including ¡Si Se Puede! / Yes We Can! Janitor Strike in L.A., The Bee Tree, and Crane Boy, all published by Cinco Puntos Press/Lee & Low. She lives with her husband on a houseboat in northern California.

Paul Mirocha creates artwork noted for its combination of rich detail and emotional appeal. He has illustrated more than twenty children's picture books and pop-ups, and his illustrations have appeared in interpretive exhibits, scientific and popular publications, and books of adult and young adult fiction and contemporary nature writing. He lives in Tucson, Arizona. You can find his website at paulmirocha.com.