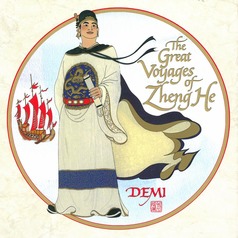 The Great Voyages of Zheng He

Written and illustrated by Demi

Imagine looking out to sea and watching over three hundred gargantuan ships, their flaming red sails caught in the wind, approaching your shore. What wonders of the world would be found on those ships?

Over 600 hundred years ago, Emperor Zhu Di of China decided to build the greatest naval fleet the world had ever seen to befriend and trade with countries throughout Asia and Africa. The admiral of this diplomatic and treasure-gathering fleet was a brilliant and peace-loving man named Zheng He.

Between 1405 and 1431, Zheng He led seven voyages of the treasure fleets, each bringing a message of friendship and peace between China and the other countries of the world. Through his leadership, these expeditions extended China s influence and brought it great treasures in trade and tribute, making China the first world superpower.

In this account of Zheng He s amazing life, award-winning author and illustrator Demi recreates the grandeur and enthusiasm of these naval voyages with her signature detailed artwork. She introduces us to this larger-than-life figure who dreamed of a world where the best of mankind was peacefully shared and celebrated, a world of intellectual growth and religious tolerance, and a world of everlasting, worldwide peace.

is the author and illustrator of more than one hundred books for children. Her works have received numerous awards and accolades, among them ALA Notable Children's Books, The New York Times Best Illustrated Books, Notable Books for a Global Society, American Bookseller Pick of the Lists, the Middle East Book Award, and the Christopher Award, which recognizes individuals whose work makes a positive difference in the world. Demi has traveled extensively and studied art in Mexico, India and China. She holds a special place in her heart for Chinese culture and counts Su Dongpo among her heroes. She lives with her husband in Carnation, Washington.