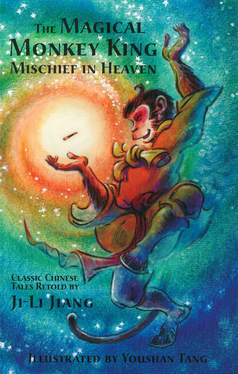 Every child in China grows up listening to stories of the irrepressible Monkey King. Smart, brave, powerful, and most of all mischievous, Monkey King finds himself in the midst of adventure at every turn. Join Monkey as he wins his title as King of the Monkeys, studies with a great sage to learn the secrets of immortality, and even takes on the job as a royal gardener in the Kingdom of Heaven. With Monkey, be prepared for surprises!

is the author of Red Scarf Girl (an ALA Notable Book), her own account of growing up in China under the Cultural Revolution. Born in Shanghai in 1954, she was a science teacher before coming to the United Sates in 1984. In 1992 she started a company, East West Exchange, to promote cultural exchange between Western countries and China. She lives near San Francisco, California.

Youshan Tang grew up in Shanghai, China, and graduated from the Central Academy of Fine Arts and Peking University with degrees in Chinese art and literature. Since 1980, Tang has made his home in San Francisco where the cultural diversity inspires his work. He is also the illustrator of Abadeha: The Philippine Cinderella and Anklet for a Princess: A Cinderella Story from India.