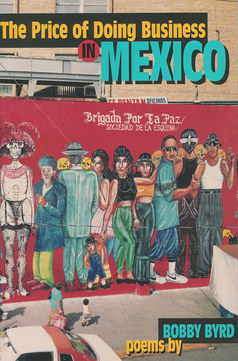 The Price of Doing Business in Mexico

Byrd's poems open a strange door--Jesus Christ and Mary Magdalene are spotted making love in downtown El Paso, a private detective goes south to Toluca to find a revolution in his heart, a sad-faced clown in Florsheim shoes lectures the poet on the mortality of his mother, and Dante and Virgil show up to explain the true meaning of North Dallas.

Poet, essayist and publisher, Bobby Byrd, with his wife Lee, received the Lannan Fellowship for Cultural Freedom in 2006. With his son John Byrd, he is co-editor of Puro Border: Dispatches, Graffiti and Snapshots from the U.S./Mexico Border and Lone Star Noir. He has published numerous books of poetry, most recently White Panties, Dead Friends & Other Bits & Pieces of Love (2006).