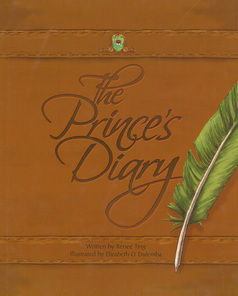 Young Prince Stephen has a problem: how to find the girl he calls Cinderella. He has seen her from afar, but figuring out how to meet her proves difficult. In this charming version of the Cinderella story, take a peek at the Prince's personal diary as he tells the well-known story from his point of view.

In his diary, find out what the Prince was feeling when he first met Cinderella, and what he really thinks about her stepsisters! All your burning questions will be answered: Did Cinderella have a fairy godmother? Did the Prince really try a glass slipper on every girl in the kingdom? And most important, what really happened at the ball? In this twist on the familiar tale, the Prince tells it like it is, and you'll be amazed by the real story.

For educator resources and ideas on how to teach Cinderella Around the World in the classroom, click here.

is an award-winning children's book author/illustrator with two dozen titles to her credit. She received a BFA in Graphic Design from the University of Georgia after a lifetime of art training. Elizabeth lives in a log cabin in the beautiful North Georgia Mountains with her husband, two big dogs, and a tiny cat who rules them all. Learn more at http://dulemba.com.