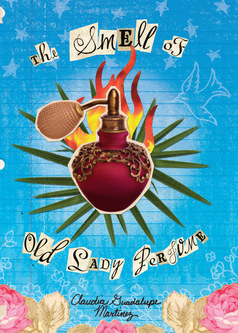 The Smell of Old Lady Perfume

Claudia Guadalupe Martinez's debut novel for young adults is a bittersweet story about death, family, and the resilient emotional strength of the human heart. Chela Gonzalez, the book's narrator, is a nerd and a soccer player who can barely contain her excitement about starting the sixth grade. But nothing is as she imagined--her best friend turns on her to join the popular girls and they all act like Chela doesn't exist. She buries herself in schoolwork and in the warm comfort of her family. To Chela, her family is like a solar system, with her father the sun and her mother, brothers, and sister like planets rotating all around him. It's a small world, but it's the only one she fits in.

But that universe is threatened when her strong father has a stroke. Chela's grandmother moves in to help the family. The smell of her old lady perfume invades the house. That smell is worse than Sundays. Sundays were sad, but they went just as sure as they came. Death was a whole other thing, and Chela doesn't understand that's what everyone is waiting for. In her grief and worry, Chela begins to discover herself and find her own strength.

Claudia Guadalupe Martínez grew up in El Paso, Texas. She learned that letters form words from reading the subtitles of old westerns for her father who always misplaced his glasses. At age six, she already knew she wanted to create stories. Her father encouraged her to dream big and write a book or two one day. Although he passed away when Claudia was eleven, her mother, family and many others continued to encourage her writing. She went on to receive a degree in literature from Claremont McKenna College on a full ride and later moved to Chicago to become one of the city's youngest non-profit executives before turning her attention to the completion of her first book, The Smell of Old Lady Perfume.