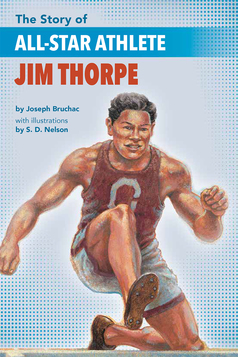 Jim Thorpe's parents knew he was special from the day he was born. He developed his athletic skills early on, playing outdoors and hunting with his father and brother. But when Jim was sent away to Indian boarding schools, he was confined to stiff uniforms and strict rules. While he struggled in academics, he always excelled in sports. As Jim moved from school to school over the years, overcoming family tragedies, he always remembered the encouragement of his brother and the words of his father—that the white man's knowledge was necessary for him and his people to survive.

The Story of All-Star Athlete Jim Thorpe is a fresh look at a world-renowned champion and allows the reader to meet the person behind the celebrated athlete. This chapter book in our “Story” line includes black-and-white illustrations as well as sidebars on related subjects, a timeline, a glossary, and recommended reading.

collaborated with Joseph Bruchac as illustrator of Crazy Horse's Vision and Jim Thorpe's Bright Path. He is also the author and illustrator of two picture book stories inspired by the traditions of his Lakota heritage — Gift Horse, winner of the Parents' Choice Award, and The Star People, an Oppenheim Gold Award winner. Nelson's lifelong interest in Ira Hayes inspired him to tell the story of this American hero for children in Quiet Hero: The Ira Hayes Story. A former middle school art teacher, Nelson is now a full-time artist. He is of Lakota (Sioux) descent and lives with his wife in Chandler, Arizona. Visit him online at sdnelson.net.