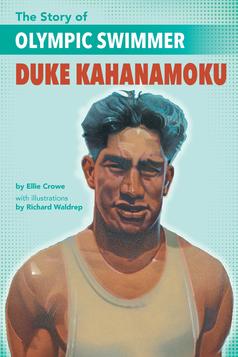 Growing up in Hawai'i with the Pacific Ocean as his backyard, Duke Kahanamoku learned to swim and surf at a young age. By his early twenties, Duke's lightning-fast swimming won him a place on the 1912 United States Olympic team and a gold medal in the 100-meter freestyle race. Over the years Duke struggled with racism and financial troubles, but by the end of his twenty-year Olympic career, he was a six-time medal winner.

Although he became a swimming champion, Duke's real passion was surfing. He traveled the world, introducing surfboarding to Australia and the east and west coasts of the United States. Considered the father of modern surfing, Duke spread his love of the ocean and Hawai'i wherever he went.

The Story of Olympic Swimmer Duke Kahanamoku introduces young readers to a man who was beloved for his modesty, sportsmanship, and amazing skill in the water. Today Duke remains a legendary waterman and an inspiration to all to live life with aloha.

This chapter book in our "Story" line includes black-and-white illustrations as well as sidebars on related subjects, a timeline, a glossary, and recommended reading.