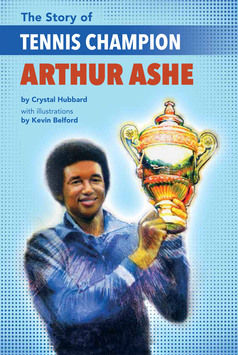 From the start, Arthur Ashe was an unlikely tennis player. As a young boy in Richmond, Virginia, in the 1940s, he was small and skinny—and barred from most tennis courts because he was black. Still, Arthur was drawn to the game and began to play wherever he could.

With patience, hard work, and humility, Arthur pursued his dream. Defeating player after player, match after match, he blazed a path on the courts, becoming the first African American man to win a Grand Slam tournament—the US Open—and the top-ranked tennis player in the world. Throughout his career, Arthur Ashe fought to overcome adversity, opening doors in his sport and promoting human rights.

The Story of Tennis Champion Arthur Ashe introduces young readers to an athlete whose grace and dignity on and off the tennis court set a shining example for us all. This new chapter book edition in our “Story” line includes black-and-white illustrations as well as sidebars on related subjects, a timeline, a glossary, and recommended reading.

is a sports buff and full-time writer. Her children’s books have received honors such as Bank Street College’s Best Children’s Books of the Year and ALA’s Amelia Bloomer Project. Hubbard lives in Missouri with her husband and their four children.

is an illustrator and a fine artist whose work has been featured in books, newspapers, magazines, and advertisements. An avid music fan, he is the author and illustrator of Devil at the Confluence: The Pre-War Blues Music of St. Louis, Missouri, a coffee table book about blues greats from the 1920s and 1930s. Belford lives in Missouri and can be found on the Web at kevinbelford.com.