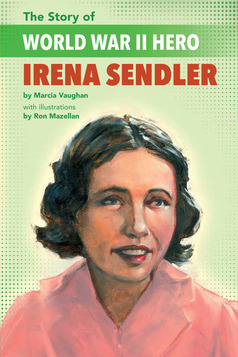 Irena Sendler, born in 1910 to a Polish Catholic family, was raised to respect all people regardless of their race or religion. As an adult she became a social worker, and after the Germans occupied Poland during World War II, Irena knew she had to help the Jews who were packed into the Warsaw Ghetto. She began by smuggling food, clothing, and medicine into the ghetto, then turned to smuggling children out of the ghetto. Using false papers and creative means of escape, Irena risked her own life to rescue Jewish children and hide them safely in orphanages, convents, and foster homes. Hoping to reunite the families after the war, Irena kept secret lists of the children’s identities, which were buried in jars under an apple tree.

Motivated by her humanity and armed with compassion and a belief in human dignity, Irena Sendler proved to the world that an ordinary person can accomplish extraordinary deeds. This new chapter book format includes illustrations as well as sidebars on related subjects, a timeline, a glossary, and recommended reading.

is an award-winning author of numerous books for children, including Snap!, a Junior Library Guild Selection, Whistling Dixie, an ALA Notable book, and The Secret to Freedom, a Teachers' Choices Award winner published by LEE & LOW BOOKS. A full-time author, Vaughan is a popular speaker at national and regional conferences. She lives in Vashon Island, Washington, with her family.

is the illustrator of several award-winning picture books, among them The Harmonica, which appeared in The Original Art, a gallery show of children’s book illustrations. He holds an MFA degree in illustration and is a professor of art at Indiana Wesleyan University. Mazellan was drawn to Irena’s Jars of Secrets by Irena Sendler’s character, bravery, and selfless acts of kindness. He and his family live in Marion, Indiana. His Web site is ronmazellan.com.