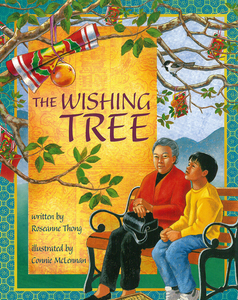 An enormous banyan tree with thick, leafy branches grew in the center of a village near an ancient temple in a green valley with a gurgling stream.

Every Lunar New Year, Ming and his grandmother visited the Wishing Tree. Its branches were covered with wishes, each written on red and yellow paper fluttering in the breeze, secured by the weight of an orange.

Grandmother warned him to wish carefully, and sure enough, Ming’s wishes always seemed to come true. But one year—when Ming made the most important wish of his life—the tree let him down.

The Wishing Tree is about the excitement of making wishes, the anticipation over waiting for them to come true and the futility of making unrealistic ones. It is also about the love between a boy and his grandmother, and the realization that sometimes, we already possess the most important things in life.

Check out the book list and cross-curricular activities for teaching and celebrating Chinese New Year.

was born in Southern California, but has lived in Asia for more than 15 years. In addition to being one of Hong Kong's leading resident authors of children's books, she has worked as a journalist and teacher, and currently teaches English at Hong Kong University's School of Continuing and Professional Education. She previously taught elementary, secondary and university students in California, Guatemala, Hong Kong, Taiwan and Vietnam.

is a freelance illustrator whose work, in a variety of styles and media, has appeared in numerous advertisements, publications, and textbooks. After earning a degree in journalism, she studied at the Academy of Art College in San Francisco. Connie works at home in Rocklin, California, where she lives with her husband, Geoff and young son, Thomas.