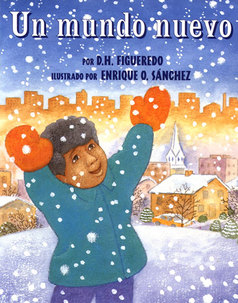 It was Danilito's first day in America. He and his parents have just made a long, exhausting move from the Caribbean to New York City. The ocean and the palm trees he is familiar with are now replaced by tall buildings and crowded streets.

Danilito is scared. He has heard that some Americans are not friendly to foreigners. In addition, he does not speak any English. His parents have worries, too. They will have to find new jobs, a new home, and adjust to the new surroundings. This was going to be their first cold winter.

Danilito's worries disappear the next morning when he wakes up and Papa leads him on a magical trip of discovery. Translated from When This World Was New, Un mondo nuevo brings us a gentle and uplifting story of coming to America.

is the author of LEE & LOW's When This World Was New, and The Road to Santiago. A native of Cuba who has lived in New Jersey since he was a teenager. Figueredo is the director of the Bloomfield College Library and is the author of Cleaning Day and Big Snowball Fight, published by Bebop Books. He lives in Piscataway, New Jersey, with his wife and their children.

has illustrated numerous award winning children's books, including LEE & LOW'S Abuela's Weave, Amelia's Road, and Confetti. A native of the Dominican Republic, he splits his time between his homes in Bass Harbor, Maine and Miami, Florida.