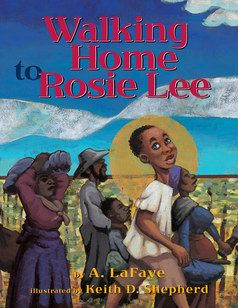 By A. LaFaye
Illustrated by Keith D. Shepherd

A post-Civil War story about a young boy who journeys tirelessly to reunite with his beloved mama.

"Come morning, the folks take to the road again, singing songs, telling stories, and dream-talking of the lives they're gonna live in freedom. And I follow, keeping my eyes open for my mama."

Gabe's story is one of heartache and jubilation. An enslaved child freed after the Civil War ends, Gabe sets off to find his mother who was sold during the war. Keith D. Shepherd's illustrations--influenced deeply by the narrative work of Thomas Hart Benton--fervently portray Gabe's struggles and emotions in this tale of resilience and love.

A. LaFaye is the author of more than a dozen books, including the Scott O'Dell Award winning novel Worth and the Skipping Stones Honor Book Walking Home to Rosie Lee, about the reunification of African American families after the Civil War. Her other picture books include Follow Me Down to Nicodemus Town, No Frogs in School, and Ready to Fly: How Sylvia Townsend Became the Bookmobile Ballerina. She lives in Greenville, Illinois, and you can visit her online at alafaye.com.

Keith D. Shepherd is a painter, graphic designer and educator working out of Kansas City, Missouri. His painting "Sunday Best" is part of the Negro League Baseball Museum's permanent collection. He describes his work as being "motivated by family, religion, history and music."