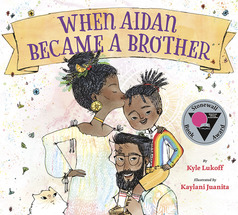 When Aidan Became a Brother

When Aidan was born, everyone thought he was a girl. His parents gave him a pretty name, his room looked like a girl’s room, and he wore clothes that other girls liked wearing. After he realized he was a trans boy, Aidan and his parents fixed the parts of life that didn’t fit anymore, and he settled happily into his new life.

Then Mom and Dad announce that they’re going to have another baby, and Aidan wants to do everything he can to make things right for his new sibling from the beginning—from choosing the perfect name to creating a beautiful room to picking out the cutest onesie. But what does “making things right” actually mean? And what happens if he messes up? With a little help, Aidan comes to understand that mistakes can be fixed with honesty and communication, and that he already knows the most important thing about being a big brother: how to love with his whole self.

When Aidan Became a Brother is a heartwarming book that will resonate with transgender children, reassure any child concerned about becoming an older sibling, and celebrate the many transitions a family can experience.

Explore a reading guide and learning activities for When Aidan Became a Brother created by the Education Division at the Anti-Defamation League (ADL) for its Book of the Month program.

Kyle Lukoff is the author of A Storytelling of Ravens, which Kirkus Reviews called "not to be missed" in a starred review. After a decade as a bookseller, he now works as a school librarian and writer in New York City. Kyle first came out as trans in 2004, and has over 15 years experience discussing trans identities and issues with adults and children from many different communities. You can find his book recommendations, notes on trans life, and praise from Rachel Maddow online at kylelukoff.com and on Twitter as @shekels_library.

Kaylani Juanita describes her mission as an artist as “supporting the stories of the underrepresented, and creating new ways for people to imagine themselves.” Her work has appeared at the Society of Illustrators and on the BBC website, as well as in her first picture book, Ta-Da!, written by Kathy Ellen Davis. She lives in the San Francisco Bay Area. Look for her online at kaylanijuanita.com and @kaylanijuanita on Twitter and Instagram.