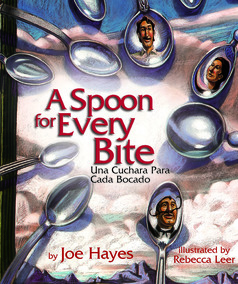 A Spoon for Every Bite / Una cuchara para cada bocado

In this lovely New Mexico folktale, a rich man tries to prove his wealth to his poor neighbors by using a new spoon for every bite. In the process, he's served a pretty dish of comeuppance.

Rebecca Leer has been a freelance illustrator for many years. Her illustrations and paintings have been awarded by organizations such as the New York Society of Illustrators, LA Society of Illustrators, Oil Painters of America, The Salmagundi Club, Hudson Valley Artists Association, American Artists Professional League, Catharine Lorillard Wolfe Art Club and Allied Artists of American, including four Best in Show. You can see more of her work at rebeccaleer.com.