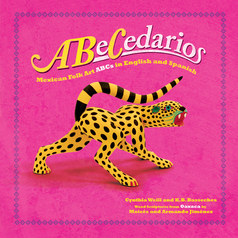 This beautifully-illustrated, bilingual ABC book is fun for young readers and the adults reading with them. Each letter is illustrated with a photograph of a hand-carved animal rendered in the eye-catching bright colors of the traditional folk art of Oaxaca, Mexico. Weill's choice of animals is delightfully quirky and provides a great opportunity to practice different letter sounds in Spanish and English.

This is the perfect book for laying the foundations of bilingual literacy for a young child, and makes a great gift for new parents, toddlers, and appreciators of Mexican folk art!

Cynthia Weill holds a doctorate in education from Teachers College Columbia University. She has worked as an educator and in the field of international development. She has been fascinated with Oaxacan crafts since 1996 when she taught in Mexico through the Fulbright exchange. She is on the advisory board of the Friends of Oaxacan Folk Art Foundation whose mission is to promote and preserve the artists and artisanal work of the state. She has published eight books that feature the folk art of Oaxaca.

Armando and Moisés are the grandsons of Manuel Jiménez, founder of the Oaxacan woodcarving tradition. In the late 1950's, shepherd Manuel Jimenez began making wooden animals. The pieces were bought by a folk-art store owner in Oaxaca City. When the creatures were quickly purchased by tourists, Manuel was asked to make more. Seeing Manuel's success, other local artisans began to imitate his work.

Today more than eighty families in the pueblo of Arrazola make their living by carving wood. The town lies below the archeological ruins of Monte Alban. Many tourists, after a visit to the ruins, come to Arrazola to buy wooden figures. Carvers use the copal tree which grows plentifully in the mountains around their town. They make all sorts of things from the wood. To begin the process of making a figure, Armando and Moises first carefully look through their woodpile. They say they can see the creature inside of each log. Next, they carve the figure with a large knife called a machete. When completed the figure must dry for several days.

Everyone in the family helped to make the pieces featured in ABeCedarios. Moises's children, Nancy and Eduardo, and Armando's son Alex sanded the pieces. Then Armando and Moises's wives, Antonia and Oralia, painted each figure.

K. B. Basseches is an artist, photographer, and writer whose work has been exhibited and published nationally. She has taught in elementary through graduate schools, most recently at the School of the Arts at Virginia Commonwealth University. Prior to teaching, she served as a staff photographer for the National Portrait Gallery, Smithsonian Institution. Dr. Basseches holds a doctorate from the University of Maryland and master's degrees from the University of Pennsylvania and George Washington University. ABeCedarios is her first work for children. K. B. Basseches lives in Richmond, Virginia, with her husband, young son and elderly cat.

Illustrated by The Master Artisans of Chigmecatitlán