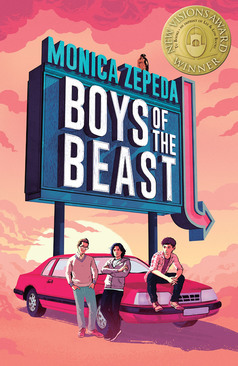 THE BOYS. Three strangers who also happen to be cousins:

Matt. Evangelical Christian. Earnest. Film nerd. Carrying a dream to make movies--despite the future his father has planned for him.

Ethan. Jewish. Gay. Sci-fi nerd. Carrying a phone that contains his entire relationship with Levi--unless they finally get to meet IRL on this trip.

Oscar. Stoner. Smartass. Too cool to be a nerd. Carrying a letter that haunts him--no matter how hard he tries to escape it.

This powerful voyage in three voices marks the brilliant debut of Monica Zepeda.

Click here to check out the Ethan's Road Trip Mixtape for Boys of the Beast, a playlist curated by author Monica Zepeda!

How well do you know Matt, Ethan, and Oscar? Take the quiz to find out!

Watch the book trailer for Boys of the Beast!

Monica Zepeda is a Southern California native who spent her teen years in the desert wilds of Joshua Tree. She moved to Los Angeles, London, and Arizona before settling down permanently in L.A.Along the way, she's worked as a bookseller, produced reality television shows, and written plays, feature films, and video games. Monica now serves as a teen librarian and lives near the beach with her husband and their unbelievably cute cats. You can find her on the web at monicazepeda.com, on Twitter at @MZWrites, and on Instagram at @MZWrites2.