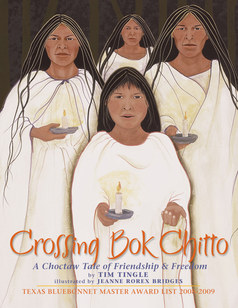 Martha Tom, a young Choctaw girl, knows better than to cross Bok Chitto, but one day--in search of blackberries--she disobeys her mother and finds herself on the other side. A tall slave discovers Martha Tom. A friendship begins between Martha Tom and the slave's family, most particularly his young son, Little Mo. Soon afterwards, Little Mo's mother finds out that she is going to be sold. The situation seems hopeless, except that Martha Tom teaches Little Mo's family how to walk on water to their freedom.

Jeanne Rorex Bridges traces her heritage back to her Cherokee ancestors. Born in Oklahoma, the artists' work is nationally known and has won many awards in Native American art shows, including the 2005 Best of Show at the Five Civilized Tribes Museum. Crossing Bok Chitto is her first fully illustrated book.