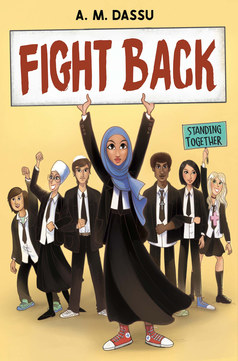 Thirteen-year-old Aaliyah can't wait for a concert by her favorite K-pop boy band, 3W. She isn't too concerned with stories on the news about the rise of the far right--after all, it doesn't affect her--until a terrorist attack at the concert changes everything.

Local racists are emboldened and anti-Muslim rhetoric starts cropping up at school and on the street. When Aaliyah starts getting bullied, she knows she has to do something to stand up to the hate. She decides that, instead of hiding who she is, she will begin wearing a hijab for the first time, to challenge how people in her community see Muslims.

But when her school bans the hijab and she is attacked and intimidated for making her choice, Aaliyah feels alone. Can she find allies--friends to stand beside her and help her find ways to fight back?

Find out what inspired award-winning author A. M. Dassu to write Fight Back in the video below!

A. M. DASSU won the international We Need Diverse Books mentorship award in 2017. She is the deputy editor of SCBWI-British Isles' Words & Pictures magazine and a director at Inclusive Minds, an organization for people who are passionate about inclusion, diversity, equality, and accessibility in children's literature. Her work has been published by The Huffington Post, the Times Educational Supplement, SCOOP Magazine, Lee & Low Books, and DK Books. She lives in the heart of England. You can find her on Twitter as @a_reflective or at amdassu.com.