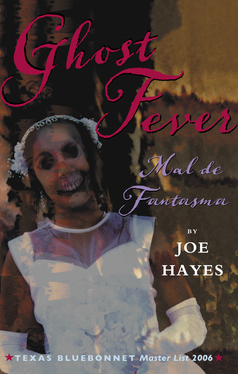 In his classic bilingual style, Joe tells the story of a haunted house in a poor little town in Arizona. Nobody will rent that house because they know a ghost lives there. So the landlord tries to rents it out for free. Still nobody will rent it. That is, until Elena's father rents it. He doesn't believe in ghosts. Lucky for Elena that her grandmother knows all about the ways of ghosts. Elena, with the help of her grandmother, resolves the mystery of "ghost fever"--and learns a lesson about life.

Mona Pennypacker was originally trained in visual arts at the Maryland Institute College of Art, where she earned her degree in Fine Arts with a minor in Latin American Art History. Mona splits her time between El Paso, Texas and Rome, Italy where she continues to study and create artwork in various mediums, including painting, printmaking and graphic design. This is her first book collaborating with her mother Vicki Trego Hill.