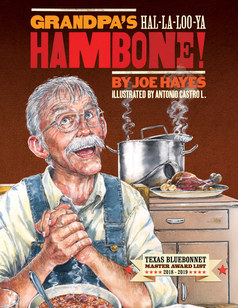 When Joe Hayes was a kid, money was real tight for his family. So tight that there was a whole year where all they could eat was beans. When Joe's father was able to buy them a big, scrumptious hambone, they were so happy that they hollered "hal-la-loo-ya!" But the whole neighborhood got wind of the flavorful delicacy and wanted a taste too. Lucky for them, Joe's mom was very neighborly, and she had some tricks up her sleeve. Way before anyone had even heard the words "reduce, reuse, recycle," Joe's mom was a recycling pro, and knew how to squeeze every bit of usefulness out of everything. So, she got inventive about making that hambone last--and that's when this Tall Tale gets even TALLER!