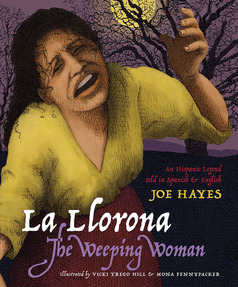 Have you ever heard the story of La Llorona, the ghost woman they say is crying and crying for her children? In this bilingual Spanish and English edition, The Weeping Woman retells the tale of a beautiful woman whose fear and jealousy dooms her to an eternal search for all she's lost.

Mona Pennypacker was originally trained in visual arts at the Maryland Institute College of Art, where she earned her degree in Fine Arts with a minor in Latin American Art History. Mona splits her time between El Paso, Texas and Rome, Italy where she continues to study and create artwork in various mediums, including painting, printmaking and graphic design. This is her first book collaborating with her mother Vicki Trego Hill.

Vicki Trego Hill is a book designer and illustrator. She lives in El Paso, Texas.