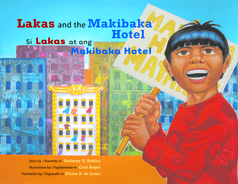 Lakas and the Makibaka Hotel


When Lakas strolls through his neighborhood one sunny afternoon, the last thing he expects to find is a group of drum-beating, tap-dancing, karaoke-singing new friends. But these new friends face a crisis: the Makibaka Hotel, where they make their home, is about to be sold. They must pack their belongings and leave their home in thirty days. Unless....

Lakas soon leads his new friends Tick A. Boom, Firefoot, and Fernando the Karaoke King in a rollicking protest against their eviction. Before long the streets of the neighborhood reverberate with the taps, raps, and chants of Makibaka-of struggle, spirit, and laughter.

Carl Angel's vivid paintings sparkle with the rhythm of the city in this second bilingual collaboration with poet and author Anthony D. Robles. Join them and Lakas on this new adventure, which transforms one community's struggle into a celebration of activism, spirit, and song.