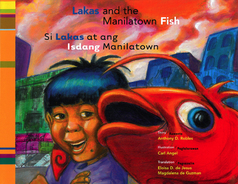 Lakas and the Manilatown Fish

Can a fish talk? Can it jump and play and run-especially run-just like a small boy? When Lakas and his dad go shopping, they meet a very special fish that can do all these things and more. This fish won't stay put in his fish tank! Once it leaps out, a cast of unusual Manilatown characters chases it down Kearny Street and all the way to San Francisco Bay. Hoy, hoy! Will Lakas and his friends ever catch this sly and charming fish? Will Lakas's dearest wish come true?

In this first-ever bilingual English-Tagalog story set in the U.S., an all-American boy of Filipino descent, some amusing manongs-Filipino elders-and a fish with unusual faculties take off on a fanciful romp through a dreamscape of the imagination. Author Anthony D. Robles's irrepressibly lively characters and improbably funny adventure will delight readers. Artist Carl Angel's evocative illustrations leap off the page and pay affectionate homage to one neighborhood's Filipino-American past.

The Horn Book
Bloomsbury Review
The Asian Review of Books