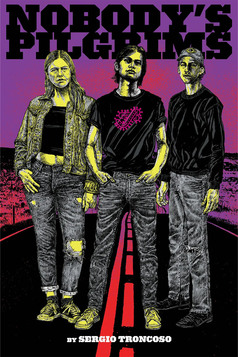 Gold Medalist for "Best Novel: Adventure or Drama in English" at the International Latino Book Awards!

Three teenagers are traveling northeast in a navy blue Ford pickup. Turi has fled his abusive family to see the beautiful New England landscape he's always dreamed about. Arnulfo is undocumented and wants only to find someplace to work and live. Molly seeks a new life far away from her nowhere Missouri town. Turi and Arnulfo are best friends. Molly and Turi are falling in love.

But for all their innocence, violence follows the trio at every turn. The mean viejito who owns the truck wants it back. The narco who hid a deadly shipment in the truck really, really wants it back. And the imperturbable hitman the narco sends after the trio will kill anyone who stands in his way. Turi, Arnulfo, and Molly might outrun the carnage that's stalking them ... but they can't elude the chaos they're carrying, no matter how far they go.

A literary novel with the propulsion of a thriller, a genre joyride written in the prose of a master, Nobody's Pilgrims both offers and questions the possibility of escape in America with a gritty frontera twist.

Watch a video from author Sergio Troncoso to learn more about Nobody's Pilgrims!

Sergio Troncoso was born and raised in El Paso, Texas. His previous works include A Peculiar Kind of Immigrant's Son, From this Wicked Patch of Dust, and The Last Tortilla. He often writes about the United States-Mexico border, immigrants, families and fatherhood, and crossing cultural, religious, and psychological borders. Among the numerous awards he has won are the International Latino Book Award for Best Collection of Short Stories, Kay Cattarulla Award for Best Short Story, Premio Aztlan Literary Prize, Southwest Book Award, Bronze Award for Essays from ForeWord Reviews, and the Silver and Bronze Awards for Multicultural Fiction from ForeWord Reviews. Troncoso has taught fiction and nonfiction at the Yale Writers' Workshop in New Haven, Connecticut for many years. He has served as a judge for the PEN/Faulkner Award for Fiction and the New Letters Literary Awards in the Essay category. His work has recently appeared in New Letters, Yale Review, Michigan Quarterly Review, Texas Monthly, and New Guard Literary Review. The son of Mexican immigrants, Troncoso grew up on the east side of El Paso in rural Ysleta. He graduated magna cum laude from Harvard College and received two graduate degrees in international relations and philosophy from Yale University. A Fulbright scholar, Troncoso was inducted into the Hispanic Scholarship Fund's Alumni Hall of Fame and the Texas Institute of Letters (TIL). He currently serves as TIL President.