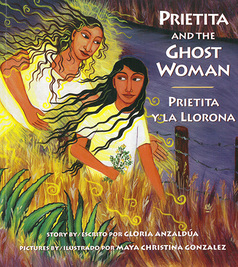 Ever since she can remember, Prietita has heard frightening stories about la Llorona—the legendary ghost woman who steals children at night. One day, when Prietita goes in search of the missing herb that can help cure her mother’s illness, she becomes lost in the woods. Suddenly she hears a distant crying sound and sees flashes of white in the trees. Could it be the ghost woman from her grandmother's stories?

In her second book for children, Gloria Anzaldúa reinterprets the famous Mexican legend of la Llorona, the ghost woman. Surrounded by the live oak and prickly pear of the Texas woods, Prietita discovers that la Llorona is not what people expect. In this magical story, Prietita's search for the healing rue plant turns into a powerful journey of self-discovery.

Check out the role of Mexican folklore in teaching and learning by Dayna Durbin Gleaves, a media specialist, from Learn NC, a program of the UNC School of Education which finds and shares the most innovative and successful practices in K–12 education.

is a widely exhibited artist renowned for her vivid imagery of strong women and girls. She has illustrated nearly twenty children’s books, and her artwork has appeared on the cover of Contemporary Chicano/a Art. My Colors, My World was the first book Maya both wrote and illustrated. Books that Maya illustrated include Laughing Tomatoes, From the Bellybutton of the Moon, and Angels Ride Bikes. She lives and plays in San Francisco, California.