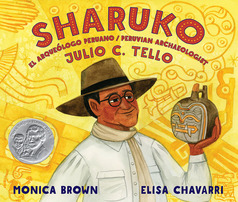 Growing up in the late 1800s, Julio Tello, an Indigenous boy, spent time exploring the caves and burial grounds in the foothills of the Peruvian Andes. Nothing scared Julio, not even the ancient human skulls he found. His bravery earned him the boyhood nickname Sharuko, which means "brave" in Quechua, the language of the Native people of Peru.

At the age of twelve, Julio moved to Lima to continue his education. While in medical school, he discovered an article about the skulls he had found. The skulls had long ago been sent to Lima to be studied by scientists. The article renewed Julio's interest in his ancestry, and he decided to devote his medical skills to the study of Peru's Indigenous history.

Over his lifetime, Julio Tello made many revolutionary discoveries at archaeological sites around Peru, and he worked to preserve the historical treasures he excavated. He showed that Peru's Indigenous cultures had been established thousands of years ago, disproving the popular belief that Peruvian culture had been introduced more recently from other countries. He fostered pride in his country's Indigenous ancestry, making him a hero to all Peruvians. Because of the brave man once known as Sharuko, people around the world today know of Peru's long history and its living cultural legacy.

Watch the Cheddar Television interview with Monica Brown about the importance of race and representation in children's literature.

Check out the TeachingBooks Virtual Book Tour with author Monica Brown as she discusses her inspiration behind Sharuko and shares kid-friendly activities.

Visit Biography Clearinghouse to learn about Monica Brown's writing process for Sharuko and discover additional resources related to the book on disciplinary thinking, social and emotional learning, and more.

MONICA BROWN has written twenty acclaimed picture books, including the Pura Belpré Illustrator Honor-winning Marisol McDonald Doesn't Match, as well as the Lola Levine and Sarai chapter book series. Most of her stories are inspired by her desire to bring diverse stories to children and by her own mixed heritage, which includes Peruvian, Scottish, Spanish, Amerindian, and Jewish ancestry. When not writing for children, Brown serves as a professor of English at Northern Arizona University, where she teaches about US Latino and multicultural literature. Brown lives with her family in Flagstaff, Arizona. Her website is monicabrown.net.

ELISA CHAVARRI is the illustrator of the popular Lee & Low title Rainbow Weaver/Tejedora del arcoiris. Chavarri is a full-time illustrator who graduated with honors from the Savannah College of Art and Design, where she majored in Classical Animation and minored in Comics. She was born in Peru and raised mostly in northern Michigan, where she still lives with her husband and their two children. You can find her online at elisachavarri.com.