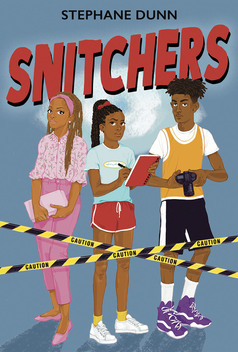 Nia Barnes is preparing to enter high school and trying to stay on her mama's good side. Life in their small Midwestern city hasn't been the same since her father was shot down in the middle of the night with no witnesses. The unsolved murder has haunted Nia ever since, driving her love of detective novels and true crime stories. And the violence isn't just where she lives--it's everywhere. Nia can't stand that nothing can stop it.

When the little boy she babysits is caught in the crossfire of a drive-by shooting, it devastates Nia, her friends, and the community. She and her best friends Dontay and Miracle Ruth want to do more than be sad and afraid. The trio secretly sets out to find who murdered Little Petey and get him justice. They look up police reports and listen to the conversations of their elders; they try to follow suspects the way Nia's favorite teen detectives might. But the search for truth isn't straightforward, especially when you're somewhere between being kids and adults, and people want peace but are afraid to talk. If Nia and her friends solve the crime, more people might end up dead. Is that justice? Should they still try?

Writer and filmmaker Stephane Dunn makes her YA debut with this endearing, heart-wrenching novel about loss, truth, and the reality of violence in communities everywhere.

Stephane Dunn is a writer, filmmaker and professor. Her work has appeared in The Atlantic, Vogue, Ms. magazine, Chronicle of Higher Education, CNN.com, The Root, and Best African American Essays 2009, among others. She is the author of Baad Bitches & Sassy Supermamas: Black Power Action Films, and the Tirota/Finish Line Social Impact Script Competition award-winning screenplay, Chicago '66. She lives in Atlanta, Georgia, with her family. Find her on Twitter at @DrStephaneDunn.