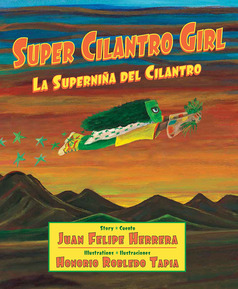 Young Esmeralda Sinfronteras eagerly waits for her mamá to come home from Mexico so the two of them can be together again. But when Esmeralda learns that that her mother is being kept at the United States-Mexico border, she begins to worry about when they'll be reunited. That night, Esmeralda makes a wish that Mamá comes home bright and full of life, like the heart-shaped cilantro leaves that grow in their garden.

The next day, there's still no word from Mamá, but something strange has happened to Esmeralda's hands. They're green--as green as cilantro leaves! At school, Esmeralda tries to hide her hands and the other parts of her body that are turning green too, but it's no use. Her hair has become tangled like green vines and she's grown fifty feet tall. Esmeralda rushes home hoping to find Mamá and ask her for help, but Mamá still hasn't returned. Missing her mother more than ever, Esmeralda decides to use her newfound powers to save Mamá herself. In a daring rescue, Esmeralda--now known as Super Cilantro Girl--finds her mother, evades border patrol, and successfully reunites her family.

Former US Poet Laureate Juan Felipe Herrera taps poetically into the wellsprings of imagination to address and transform the very serious concerns many first-generation children have about national borders and immigrant status. And artist Honorio Robledo Tapia, a prize-winning illustrator of children's books, has created landscapes that will delight all children in this heartwarming story about a brave girl who becomes her own hero.

Honorio Robledo, artist and musician, has illustrated four Lee & Low books: ¡El Cucuy! , Nico Visits the Moon and The Dog Child with the imprint Cinco Puntos Press, and Super Cilantro Girl with Children's Book Press. He and his wife Luana moved to Mexico so their children could grow up barefoot.