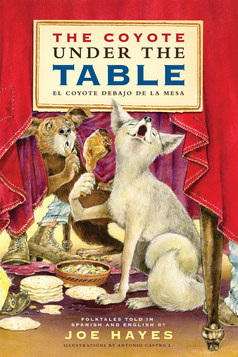 What happens when an old dog sitting at the dinner table with his master slides a whole leg of lamb, a big bowl of posole, a stack of tortillas and a bottle of wine to a coyote, who just happens to be under the table? A whole ruckus, that's what!

But that's nothing compared with some of the other wild and wonderful folktales gathered by author Joe Hayes in this bilingual edition of The Coyote Under the Table. Like his signature collection The Day It Snowed Tortillas, this book is full of lively characters and laugh-out-loud stories. There's a trio of unsuitable suitors who court a clever young girl and end up being scared out of their wits one midnight in a haunted church. And a greedy man who learns his lesson on a day when he couldn't stop dancing. And a spotted cat who is actually a guardian angel in disguise.