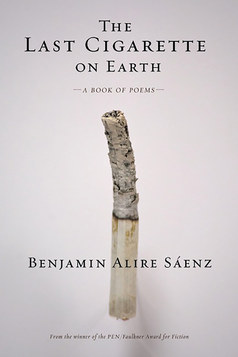 The Last Cigarette on Earth

From "He Leaves a Message in the Middle of the Night"

He loved beer
and crack. He loved heroin, ecstasy, the sad music
of the bars. He said he loved you too. You are
thinking of the night you met him. Late October
night, the breeze as soft as his black eyes. He was
so hungry for trouble. You were so hungry
for anything that resembled love. Your finger
tracing the tattoos on his chest, you dreamed
of living in the prison of his arms. But you refused
to live in the prison of his deadly nights. You
can't survive without the morning
light. You repeat this again and again:
He's a man, not an illness. Tattoos and prison.
Novels and poems.

A bird can love a fish but they can't
live in your apartment. He called again last night
and left a message that was meant to wound.

You whispered his name in the dark.