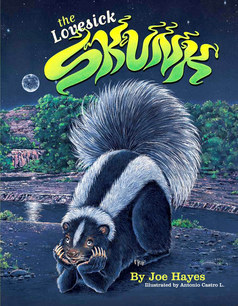 Joe Hayes must have had a singular growing up in the Arizona desert because he sure loves to write stories about it. And he tells those stories of his so much to audiences all over the United States that it seems like the stories just get more and more fantastic. I bet you've already heard the first tall tale he wrote--The Gum-Chewing Rattler--about a rattlesnake who chewed bubblegum. Yes, it's true. That scary snake even blew huuuuuge bubbles.

Now Joe has written a new story about his early years in Arizona. Joe, the kid, was a creature of habit. If he decided he liked to do something, he would do it over and over again. Like wear the same T-shirt until it nearly fell apart or use the same pencil until he'd sharpened it down to a nub. He also had a pair of black-and-white high-top sneakers that he loved to wear. He wore them every day. "Get rid of those shoes," his mother told him one morning. "They smell terrible!"

Did Joe listen? Not until he met the back end of a skunk.

And this wasn't just an ordinary skunk, but one who was lovesick.

But I'm not going to tell you who she was in love with. You'll have to find that out for yourself.