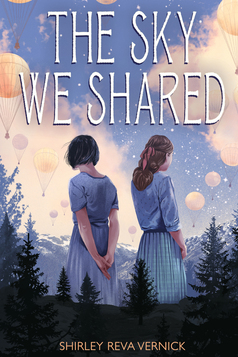 In southern Japan, Tamiko spends her time writing in her diary, dreaming of making theatrical costumes, and praying her brother Kyo makes it back from the war. She wishes she could be brave like him and help the war effort.

In rural Oregon, Nellie spends her time lying in the grass, studying the stars, and wishing for her pa to return from the war and that the boy next-door neighbor, Joey, would talk to her again like he used to.

Tamiko and her classmates are brought to a damp, repurposed theater to make large paper balloons to help the military.

No one knows what they are for.

Nellie and her classmates ration food, work in salvage drives, and support their community.

No one knows what's coming.

Based on Japan's Project Fu-Go during the last stretch of World War II, The Sky We Shared uses the alternating perspectives of Nellie and Tamiko to depict the shared tragedies of two countries at war.