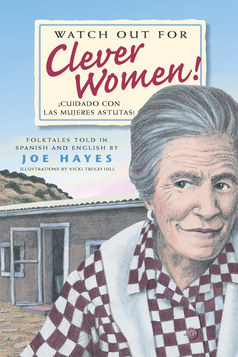 A bilingual collection of humorous trickster tales, in which women pit their formidable intelligence to outwit villains, husbands, brothers, fathers, and sweethearts. From the kind woman who tricked two men who thought they had robbed her of a ham to the woman who saved her gold by tricking her foolish husband into thinking it had snowed tortillas, these tales cultivate lessons of honesty, goodness, hospitality, and honor--not to mention intelligence and wit to survive. As Joe Hayes points out, "People the world over tell stories of a humble individual tricking an overbearing person of higher status, but the idea is especially cherished in Hispanic storylore. Making the trickster a woman adds spice to the trick."

Vicki Trego Hill is a book designer and illustrator. She lives in El Paso, Texas.