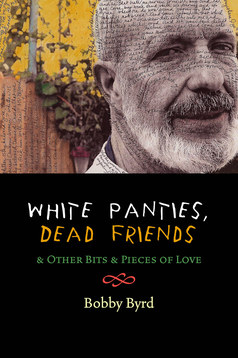 The book is divided into three sections of poems: White Panties, The Hospice Poems: In Memory of Steve Sprague, and Other Bits & Pieces of Love.

What Happened on My Front Porch
Last night Allen Ginsberg waved goodbye
forever. Several bees, a scorpion and a butterfly
joined him in his departure, although I didn't
see them go off together. Their disappearance
was purely speculation. Before saying goodbye
Allen murmured that he doesn't believe
in a world of things. Why should he?
The end has never been the end,
and the universe is an open field of play,
a way of breathing. Here we don't know what
is going to happen one day to the next.
Except we will suffer. Except we will change.
Allen smiled and blessed me.
He doesn't want to be bothered anymore.
He was wearing his beard long again.
He seemed very much at peace.
I was sober. The moon
navigated in and out among the clouds.
I listened to the trains on Montana Street whistling
and I could hear my neighbors two houses down
drinking beer and singing and chattering
about nothing. None of us will ever
know how wise we are. Inside
the house my wife was asleep,
she who for over 35 years has studied
the human geography of who I am.
Allen had tied his boat to the juniper tree--
a light boat, with short oars--he climbed
aboard and sailed off into the nowhere,
happy to have saved us all.

Poet, essayist and publisher, Bobby Byrd, with his wife Lee, received the Lannan Fellowship for Cultural Freedom in 2006. With his son John Byrd, he is co-editor of Puro Border: Dispatches, Graffiti and Snapshots from the U.S./Mexico Border and Lone Star Noir. He has published numerous books of poetry, most recently White Panties, Dead Friends & Other Bits & Pieces of Love (2006).