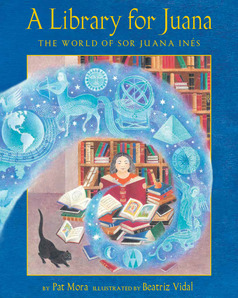 A Library for Juana: The World of Sor Juana Inés

From a very young age, Juana Inés loved words. When she was three years old, she followed her sister to school and begged the teacher to let her stay so she could learn how to read. Juana enjoyed poring over books and was soon making up her own stories, songs, and poems.

Juana wanted to become a scholar, but career options for women were limited at this time. She decided to become a nun—Sor Juana Inés de la Cruz—in order to spend her life in solitude reading and writing. Though she died in 1695, Sor Juana Inés is still considered one of the most brilliant writers in Mexico's history: her poetry is recited by schoolchildren throughout Mexico and is studied at schools and universities around the world.

Beatriz Vidal is an award-winning painter, illustrator, and teacher. Her work has appeared in well-known publications such as The New York Times Magazine, Woman’s Day, and the New Yorker. Her artwork has also been featured on PBS programs and in numerous exhibitions around the world, including the International Exhibition of Illustrations for Children in Italy and the Society of Illustrators in New York. Vidal divides her time between New York City and Buenos Aires, Argentina. You can visit her online at beatrizvidal.com.