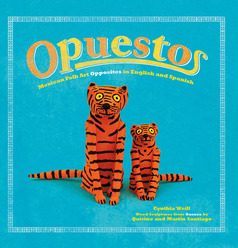 Cynthia Weill's book of Mexican folk art introduces young readers to opposites in Spanish and English. These whimsical little animals, carved and painted by hand, make learning about opposites fun. Up and down, tall and short, left and right--all inside a beautiful book.

Cynthia Weill holds a doctorate in education from Teachers College Columbia University. She has worked as an educator and in the field of international development. She has been fascinated with Oaxacan crafts since 1996 when she taught in Mexico through the Fulbright exchange. She is on the advisory board of the Friends of Oaxacan Folk Art Foundation whose mission is to promote and preserve the artists and artisanal work of the state. She has published eight books that feature the folk art of Oaxaca.

Martín and Quirino Santiago are brothers who carve wooden figures. The figures in Opuestos were made in La Union Tejalapam, a Oaxacan village that lies in a valley between the mountains of the Sierra Norte. Martín Santiago, a farmer, began carving in the late 1960s and his brother Quirino followed him into the trade soon after.

The figures are made from the wood of the flowering jacaranda tree. After carving the pieces, the artisans paint them with natural aniline dyes. Making the figures requires enormous skill as the artisans work with machetes on small pieces of wood. Quirino and Martín draw inspiration from the world around them. They observe their own livestock such as goats and cows, domestic animals like cats and dogs, and the wild animals they see such as deer and lynx.

Quirino and Martín carved the figures in Opuestos with help from their brother Placido and his sons Calixto and Eloy, their nephew Maximino Santiago, their cousin Julio Jimenez, and Martin's son Jaime.

Illustrated by The Master Artisans of Chigmecatitlán