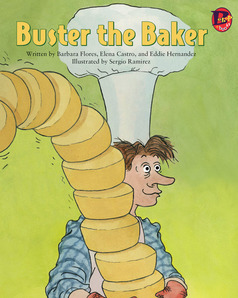 Buster the baker wants to bake a cake. Read this story to see what happens.