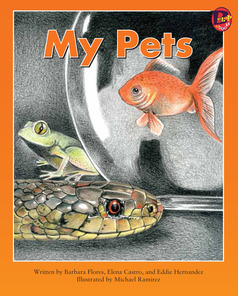 A boy has three noisy pets. Read to find out about the sounds they make.