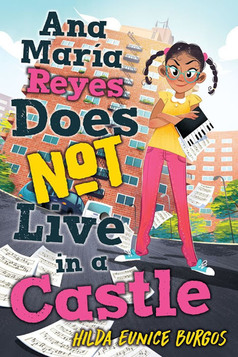 Ana Maria Reyes Does Not Live in a Castle

When Ana María first saw her family’s New York City apartment at age three, “it seemed as big as a castle.” Now, the 11-year-old shares a tiny bedroom with two of her three sisters, and a new baby is on the way. A gifted student and pianist, the girl worries that a fifth sibling will financially jeopardize her chances of getting a good education and further distract her mother, whom she believes doesn’t love her as much as she loves her sisters. Writing in Ana María’s often angst-riddled voice, debut author Burgos builds the drama as her determined protagonist applies for a scholarship to a private school, performs in a piano recital at Lincoln Center, and discovers during a trip to her parents’ native Dominican Republic that the aunt she idolizes is a snob who abuses her adolescent maid. Despite encroachment on melodramatic turf, the novel offers a poignant portrait of a warm extended family, and its heroine’s transition from self-centered to empathetic is credible and gratifying.

Booklist
Julia Alvarez, author of HOW THE GARCIA GIRLS LOST THEIR ACCENTS, RETURN TO SENDER, and the Tía Lola stories
Linda Urban, author of A CROOKED KIND OF PERFECT and ROAD TRIP WITH MAX AND HIS MOM
Diana López, author of CONFETTI GIRL and LUCKY LUNA