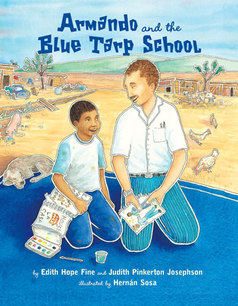 Armando and the Blue Tarp School

Edith Hope Fine and Judith Pinkerton Josephson’s new book, Armando and the Blue Tarp School, is a testament to the pursuit of dreams and the power of one person to make a difference in the lives of others. Armando’s family are pepenadores, trash pickers, living in a colonia near the Tijuana city trash dump. They make their from things they find in the dump, yet Armando longs to go to Señor David’s school, a blue tarp spread on the ground. Finally Armando’s parents decide to let him spend afternoons at the school, and Armando is overjoyed. He’ll learn to read and write. He’ll learn numbers. Best of all, he’ll draw pictures. When a fire in the colonia burns down many homes, it is Armando’s picture of the fiery night that helps bring outside support and money to construct a school building for the children of the colonia.

Since 1980 Fine and Josephson have collaborated on numerous newspaper and magazine articles and columns, as well as four books. They have written twenty-seven books between them. Armando and the Blue Tarp School is their latest joint effort. “Coauthoring means we can bounce ideas off each other,” say Fine and Josephson. “What one of us doesn’t think of, the other may. We are fortunate in that we have similar writing standards as well as different, but compatible, writing strengths. We often read a manuscript out loud to each other to hear the rhythm of the words and to listen for repetition or uneven spots. For the final manuscript, we must both be happy with the plot, characters, and theme.” About the entire business of coauthoring, the writers go on to add, “It’s hard work, but so intriguing.”

For Fine and Josephson, ideas are everywhere. It’s grabbing them and wrestling them into a manuscript that defines the writing life. They based Armando and the Blue Tarp School on the work of teacher and humanitarian David Lynch, whom they first wrote about for the Los Angeles Times in the mid-1980s. Lynch’s original school in a Tijuana colonia was a tarp spread on the ground. “After reading our article, one Times reader sent money for a real school. Her gift astounded and thrilled us,” say Fine and Josephson.

In trips to the colonia in the years after their Times articles were published, the writers have witnessed the changes that Lynch has made possible in the lives of young children who live there. Fine and Josephson have only words of admiration and awe for Lynch. “We have been intrigued by the way in which he has impacted the lives of so many people. What began as the work of one individual now has a broad support base from Responsibility, Inc., a foundation that raises awareness and donations for the education of children who live near the Tijuana dump. In drawing others into this endeavor, Lynch has created a critical mass of people willing to become involved.” An Authors’ Note at the end of the

book tells how Lynch’s work in Tijuana evolved into twenty-seven years of service, giving options through education to the young children of the colonia. Gratifying, too, is that one boy who attended Lynch’s blue tarp school in the 1980s is now a teacher at the school. His daughter plans to be a doctor. The other son is a computer/Internet whiz.

In writing the story, the authors’ challenge was finding a way to have the “real” David Lynch interact with the fictional Armando, a composite character based on the many children Fine and Josephson encountered on their visits to the colonia. Then they had to develop a plot that encompassed problems and solutions that gave Armando hope for the future. The authors agree that their goal was to “highlight David Lynch’s work by compressing actual events and layering a plot that would rivet young readers.”

With the book completed, Fine and Josephson hope “readers will understand our universal message of hope—that for youngsters who live in poverty, education holds the key to a better life, an empowered life.” They also feel that even young readers can spot a need and act to create change. “It’s the power of one person to make a difference,” they say.

Asked what advice they have for new writers, Fine and Josephson suggest, “First, look around at your own life, in your own community. The stories that will grip young readers are there. Your tale can be reality based, but you’re the one who must mold it into a compelling story. Second, educate yourself. Read in the genre in which you hope to publish. Know the field—what’s being published now, not the books you loved as a child. Understand your role. Besides wearing your writer’s hat, you’ll be donning editing and marketing hats. Do it with flair. And third, if you’re serious, persist. Get your work out there. You can’t sell a manuscript from your desk drawer.”