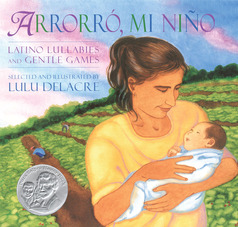 Lulu Delacre strives to bring quality literature to children. She also makes it her mission to preserve and celebrate her Latino heritage through her work. "I feel very strongly that as Latinas raise our children in the U.S. within two cultures, we must keep our traditions and folklore alive and pass them on to our young. It is the way to give children roots, especially as they learn to cherish the language and culture of the U.S.A." In March, 2004, LEE & LOW BOOKS released Delacre's Arrorró, mi niño Latino Lullabies and Gentle Games, a bilingual collection of traditional Latino baby games and lullabies from fourteen Spanish-speaking countries, complete with melodies for chanting and singing. "What sparked the idea for Arrorró mi niño was the need I saw for a bedtime book for Latinas living in the United States. I was often asked to consider creating a collection of first songs and games for the very young. As time passed, I realized that although there are several beautiful collections of Latino folklore available, none were truly conceived as a bedtime book," says Delacre.

Delacre went to great lengths to select the right lullabies and games for this book. "The research for the songs started as I poured over anthologies, reminisced with relatives and friends, and finally crafted a survey to be answered by Latinas from all walks of life from all across America." Seventy-five women from fourteen various Hispanic countries answered Delacre's survey. "As I read their responses," says Delacre, "I sometimes discovered charming new versions of a lullaby or game. I ended up arranging the material so it could be sampled all in one sitting."

Lulu Delacre is also an illustrator, and she created the art for Arrorró mi niño. Interestingly, the book could have ended up looking very different. "In the beginning, I toyed with the idea of illustrating the book with animal mothers and babies, animals indigenous to different Latin American countries. However, as I thought about it more, I realized that what I really wanted was to portray the Latino reality in the U.S." For Delacre, this meant showing that there are all sorts of Latinos embedded in the American fabric. The author spent about two years sketching mothers and their babies. "I made a list of where Latinas go, and went there with my camera," says Delacre. "I visited Latino markets, Latino neighborhoods in several states, parks, public libraries, and schools. I have pictures of Latinas working in the strawberry fields of Pennsylvania, of single mothers in the mall, and of Latinas in the park."

Delacre used the women and children in her photographs as her inspiration for the illustrations. "One winter day I saw this beautiful mother crossing an avenue," says Delacre. "Her dark hair, woven into a tight braid, fell across her back, reaching past her flimsy sweater. She wore a long black skirt sprinkled with red flowers, and in her arms was a tiny baby swaddled in a soft pink blanket. She looked almost out of place standing dressed in Guatemalan garb on the snowy sidewalk, holding a bus ticket in her fingers. I made a u-turn and parked, walked over to her, introduced myself and my project, and asked for permission to take her picture. She embodied what I wanted to portray in this book— Latinas of all social classes, of different origins, of different shades, united in the love for our heritage and the love for our children."

Delacre painted the illustrations for Arrorró mi niño with oil paints thinned with turpentine. "I wanted richness in texture and depth in color, mimicking what I imagine the lives of these women to be," she says. "I also wanted to portray the strong bond between mother and child that occurs regardless of time and place as they are enveloped in a game or lullaby, so I paid close attention to the facial expressions of my characters, to their gestures. I crafted each picture as if it were a glimpse into the private world of the mother and baby portrayed."

Lulu Delacre is a full-time author and illustrator of children's books. She lives in Silver Spring, Maryland with her husband and their daughter.